Skip to content
“Weekday Blues” is about the everyday struggle that most people experience. Traffic jams, day care, eight hours at the job etc. Then finally the Weekend comes and you have two days to do you. What ever that may be. – Lenny Williams 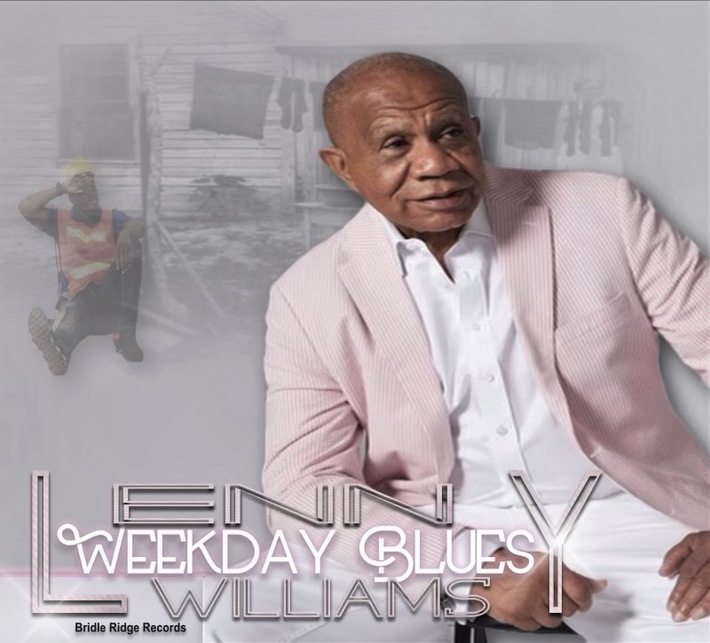 Lenny himself sounds better than ever as he continues to keep the focus on love. “Love is what has gotten me through all of these years. I look for love and I surround myself with it,” Lenny says. When it comes to singing love songs, one must “go there to know there,” and Lenny never left. He is able to take the listener to the heart of love with such soulful aplomb because love will never go out of style and no one does it better. Then…Born in Little Rock, Arkansas, Lenny moved to Oakland at a very young age. Learning to play the trumpet in elementary school fueled his interest in music. Lenny’s skills as a vocalist were first nurtured by singing in gospel choirs and groups around the Bay Area, where he was in good company, working alongside up-and-coming artist Sly Stone, Andre Crouch, Billy Preston and members of the Hawkins family–Edwin, Walter and Tramaine. After winning several local talent contests, Williams signed his first record deal with Fantasy Records. He cut two singles for the label, including “Lisa’s Gone,” now regarded as an R & B classic among British soul music lovers, and “Feelin Blue,” written by John Fogerty of Creedence Clearwater Revival. Lenny then spent a brief time with Atlantic Records, before deciding to put his solo career on hold in 1972, when he joined the emerging funk band Tower of Power. A string of hits ensued, including “So Very Hard To Go,” and “Don’t Change Horses (In The Middle of The Stream),” written by Lenny Williams and Johnny “Guitar” Watson. During his two years with the group, Lenny participated in three milestone albums, the Gold LP Tower Of Power, Back To Oakland, and Urban Renewal, while touring non-stop throughout the United States, Europe and Asia. At the end of 1975, Lenny returned to his solo projects. Initially signing with Motown in 1972, he later moved to ABC Records in 1977 (which was then purchased by MCA Records in 1979). Over the next four years, Lenny scored ten charted hits, including “Shoo Doo Fu Fu Ooh,”, “Choosing You,” “You Got Me Running,” “Love Hurt Me Love Healed Me,” and “Midnight Girl.” Lenny recorded four more albums from 1977 to 1980– Choosing You, his first gold LP, Spark of Love, Love Current, and Let’s Do It Today. These albums established a solid and loyal following for Lenny, and the impact of his music can still be felt, particularly the mega-hit “Cause I Love You”, from Spark Of Love. This song crosses generational boundaries, and has frequently been used on “old school” and “slow jam” compilations throughout the years. In 1986, Lenny was invited to sing vocals on “Don’t Make Me Wait For Love,” a track from superstar sax man Kenny G’s multimillion selling album Duo Tones. When released as a single in 1987, the song became a Top 20 Pop and R & B hit. Now…Over the past few years, Lenny has continued his solo career, touring the US, Europe and South Africa. In 2004 and 2005, Lenny and Kanye West were honored recipients of the BMI Songwriters Award for the song “Over Night Celebrity,” recorded by rapper Twista. In the Summer of 2018, Lenny’s smooth tones were on display in the song “I Love My Momma,” a collaboration with superstar rapper Snoop Dogg, featured on the popular HBO miniseries Sharp Objects. Over the years, he has shared stages with Aretha Franklin, Alicia Keys, K-Jon, Anthony Hamilton, The Whispers, Rick James, Boney James, Bobby Womack, The Ohio Players, Al Green, Usher and Frankie Beverly and Maze. Lenny has also expanded his multi dimensional career to include acting, starring in several popular stage plays. As an icon of the past and the present, Lenny Williams continues to expand his musical prowess and flex his newly found acting skills. He is sure to continue wowing his fans in the United States and beyond for decades to come. Now a Doctor, since receiving his honorary Doctorate of Fine Arts degree from California State University, Lenny Williams has the right musical prescription to soothe real music lovers. “I’m going to continue to evolve and grow as I learn and experiment lyrically and musically. I’ve been doing this for a long time now and I’ve been watching all of the changes going on in the music business. I have my own label now (Bridle Ridge Records); let me do my thing,” Lenny says. Yes, indeed, music lovers everywhere want him to do those things that he is the musical master of. Like a flowering perennial, prolific soul man Lenny Williams is always prepared for the spotlight that he belongs in.
Connect w/ Lenny Williams:
Facebook: @ohohohLenny
Twitter: @LennyWilliams
Instagram: @ohohohLenny
YouTube Channel: Lenny Williams